Which of the following is not correct?

(a) Robert Brown discovered the cell.

(b) Schleiden and Schwann formulated the cell theory.

(c) Virchow explained that cells are formed from pre-existing cells.

(d) A unicellular organism carries out its life activities within a single cell.

(a) Robert Brown did not discover the cell. The cell was discovered by Robert Hook.

(a) bacterial fermentation        (b) regeneration of old cells

According to the biogenic theory, new cells can only arise from pre-existing cells. Only complete cells, in favourable conditions, can give rise to new cells.

(b) Cisternae       (ii) Infoldings in mitochondria

Which of the following is correct:

(a) Cells of all living organisms have a nucleus.

(b) Both animal and plant cells have a well defined cell wall.

(c) In prokaryotes, there are no membrane bound organelles.

Membrane-bound organelles are organelles surrounded by a double membrane. Nucleus, mitochondria, chloroplasts, etc., are examples of such organelles. These cell organelles are absent from prokaryotes.

(a) Only eukaryotic cells have nuclei. They are absent from prokaryotes.

(b) Cell walls are only present in plant cells. They are absent from all animal cells.

What is a mesosome in a prokaryotic cell? Mention the functions that it performs.

Mesosome is a convoluted membranous structure formed in a prokaryotic cell by the invagination of the plasma membrane. Its functions are as follows:

(1) These extensions help in the synthesis of the cell wall, replication of DNA. They also help in the equal distribution of chromosomes into the daughter cells.

(2) It also increases the surface area of the plasma membrane to carry out various enzymatic activities.

(3) It helps in secretion processes as well as in bacterial respiration.

How do neutral solutes move across the plasma membrane? Can the polar molecules also move across it in the same way? If not, then how are these transported across the membrane?

Name two cell-organelles that are double membrane bound. What are the

characteristics of these two organelles? State their functions and draw labelled

Mitochondria and chloroplasts are the two organelles that are double-membrane-bound. 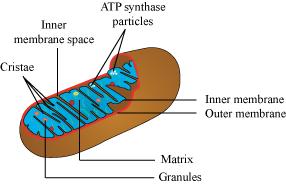 Characteristics of the mitochondria

These folds are known as cristae. Cristae increase the surface area inside the cell. They are the sites for ATP-generating chemical reactions. The membrane of a mitochondrion contains specific enzymes meant for specific mitochondrial functions. Hence, the mitochondria are the sites for aerobic respiration. They have their own DNA and ribosomes. Thus, they are able to make their own proteins. This is why they are considered as semi-autonomous organelles

(i) Grana are stacks of flattened discs containing chlorophyll molecules. The flattened membranous sacs are called thylakoids. The thylakoids of adjacent grana are connected by membranous tubules called stroma lamellae.

(ii) Stroma is a homogenous mixture in which grana are embedded. It contains several enzymes that are used for the synthesis of carbohydrates and proteins. It also contains its own DNA and ribosomes. 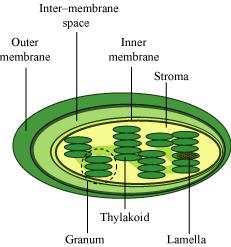 Functions of the mitochondria:

(i) They are the sites for cellular respiration.

(ii) They provide energy in the form of ATP for all vital activities of living cells.

(iii) They have their own DNA and ribosomes. Hence, they are regarded as semi-autonomous organelles.

(iv) They have several enzymes, intermediately required for the synthesis of various chemicals such as fatty acids, steroids, and amino acids.

(i) They trap solar energy and utilise it for manufacturing food for plants. Hence, they are involved in the process of photosynthesis.

(ii) They contain the enzymes required for the synthesis of carbohydrates and proteins.

What are the characteristics of prokaryotic cells?

The characteristics of prokaryotic cells are as follows:

(i) Most of them are unicellular.

(ii) They are generally small in size. The size of a prokaryotic cell varies from 0.5 – 5 µm.

(iv) The genetic materials of prokaryotic cells are naked. They contain single, circular chromosomes. In addition to the genomic DNA, they have a small, circular plasmid DNA.

(v) They have specialised membranous structures called mesosomes. Mesosomes are formed by the invagination of the cell membrane. These extensions help in the synthesis of the cell wall, replication of DNA. They also help in the equal distribution of chromosomes into the daughter cells.

(vi) Membrane-bound cell organelles such as mitochondria, plastids, and endoplasmic reticulum are absent from a prokaryotic cell.

Multicellular organisms are made up of millions and trillions of cells. All these cells perform specific functions. All the cells specialised for performing similar functions are grouped together as tissues in the body. Hence, a particular function is carried out by a group of cells at a definite place in the body. Similarly, different functions are carried out by different groups of cells in an organism. This is known as division of labour in multicellular organisms.

Cell is the basic unit of life. Discuss in brief.

Cells are the basic units of life capable of doing all the required biochemical processes that a normal cell has to do in order to live. The basic needs for the survival of all living organisms are the same. All living organisms need to respire, digest food for obtaining energy, and get rid of metabolic wastes.

Cells are capable of performing all the metabolic functions of the body. Hence, cells are called the functional units of life.

What are nuclear pores? State their function.

These holes allow specific substances to be transferred into a cell and out from it. They allow molecules such as RNA and proteins to move in both directions, between the nucleus and the cytoplasm.

Lysosomes are membrane-bound vesicular structures holding a variety of enzymes such as lipases, proteases, and carbohydrases. The purpose of lysosomes is to digest worn out cells. They are involved in the intracellular digestion of foreign food particles and microbes. Sometimes, they also act as suicidal bags. They are involved in the self digestion of cells. They are a kind of waste disposal systems of a cell. On the other hand, vacuoles are storage sacs found in cells. They might store the waste products of cells. In unicellular organisms, the food vacuole contains the consumed food particles. It also plays a role in expelling excess water and some wastes from the cell.

Describe the structure of the following with the help of labelled diagrams.

Nucleus controls all the cellular activities of the cell. It is spherical in shape. It is composed of the following structures:

Nuclear membrane: It is a double membrane separating the contents of the nucleus from the cytoplasm. The narrow space between the two membranes is called the perinuclear space. Nuclear membrane has tiny holes called nuclear pores. These holes allow specific substances to be transferred into a cell and out from it.

Nucleoplasm/Nuclear matrix: It is a homogenous granular fluid present inside the nucleus. It contains the nucleolus and chromatin. Nucleolus is a spherical structure that is not bound by any membrane. It is rich in protein and RNA molecules, and is the site for ribosome formation. Chromatin is an entangled mass of thread-like structures. It contains DNA and some basic proteins called histones.

Centrosome consists of two cylindrical structures called centrioles. Centrioles lie perpendicular to each other. Each has a cartwheel-like organisation.

A centriole is made up of microtubule triplets that are evenly spaced in a ring. The adjacent triplets are linked together. There is a proteinaceous hub in the central part of a centriole. The hub is connected to the triplets via radial spokes. These centrioles help in organising the spindle fibres and astral rays during cell division. They form the basal body of cilia and flagella. 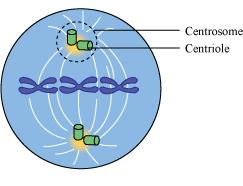 Centromere is a constriction present on the chromosomes where the chromatids are held together.

Chromosomes are divided into four types based on the position of the centromere.

The chromosomes in which the centromere is present in the middle and divides the chromosome into two equal arms is known as a metacentric chromosome.

The chromosome in which the centromere is slightly away from the middle region is known as a sub-metacentric chromosome. In this, one arm is slightly longer than the other.

The chromosome in which the centromere is located close to one of the terminal ends is known as an acrocentric chromosome. In this, one arm is extremely long and the other is extremely short.

The chromosome in which the centromere is located at one of the terminal ends is known as a telocentric chromosome.