Differentiate between balance of trade and current account balance.

What are official reserve transactions? Explain their importance in the balance of payments.

Importance of ORT in balance of payments:

1. Purchase of a country’s own currency is a credit item in the balance of payments; whereas, sale of the currency is a debit item.

2. It helps to adjust the deficit and surplus in balance of payments.

Distinguish between the nominal exchange rate and the real exchange rate. If you were to decide whether to buy domestic goods or foreign goods, which rate would be more relevant? Explain.

Nominal exchange rate is the price of one currency in terms of another. It is the amount of domestic currency required to buy one unit of foreign currency. For example a rupee-dollar exchange rate of Rs 45 means that it costs 45 rupees to buy 1 dollar.

If, I were to decide whether to buy domestic goods or foreign goods, then real exchange rate will be more relevant, because real exchange rate takes the inflation differential among the countries into account and is also used as an indicator of a country’s competitiveness in the foreign trade.

Therefore, the real exchange rate is 2.

Explain the automatic mechanism by which BoP equilibrium was achieved under the gold standard.

Under the gold standard system, gold was taken as a common unit for measuring other country’s currency. Thus, the value of a currency was defined in terms of gold. The exchange rate in an open market was determined by its worth in terms of gold. It was fixed in lower limits and upper limits, under which it was allowed to fluctuate. So, the exchange rate became stable under gold standard. All the countries maintained stock of gold to exchange currency. 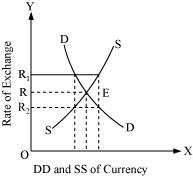 Differentiate between devaluation and depreciation.

Would the central bank need to intervene in a managed floating system? Explain why.

Marginal propensity to import is the fraction of additional income spent on imports.

Therefore, marginal propensity to import (m) = 0.06. It reflects induced imports; that is the part of the total imports, which is a function of income.

Why is the open economy autonomous expenditure multiplier smaller than the closed economy one?

In case of a closed economy, equilibrium level of income is given by

In the case of an open economy, equilibrium level of income is given by

Calculate the open economy multiplier with proportional taxes, T = tY, instead of lump−sum taxes as assumed in the text.

In the case of proportional tax, the equilibrium income would be

(b) Find the net export balance at equilibrium income

(c) What happens to equilibrium income and the net export balance when the government purchases increase from 40 to 50?

(a) Equilibrium level of income

(b) Net exports at equilibrium income

In the above example, if exports change to X = 100, find the change in equilibrium income and the net export balance.

Now, the component on the LHS can be regarded as national savings. That is, net national income which is left after consumption and government spending. Getting back to the equation (1), we can say:

Note : There is a misprint in the question as the equation mentions Sg  instead of SP. The correct equation is G − T = (SP − I) − NX.

Should a current account deficit be a cause for alarm? Explain.

Current account deficit is the excess of total imports of goods, services and transfers over total exports of goods, services and transfers. This situation makes a country debtor to the rest of the world. But, this cannot be always treated as a cause for alarm because countries might be running in deficits (current account) to increase productivity and exports in future. Also, more investment will help in building capital stock, which in future will lead to rise in output.

It shows the government is running budget deficit

Since NX is negative, it implies trade deficit.

Discuss some of the exchange rate arrangements that countries have entered into to bring about stability in their external accounts.

To combine the two extreme positions, `fixed’ and ‘flexible’, the following exchange rate arrangements are used by governments to bring stability in external accounts:

A system that allows adjustment in fixed exchange rate is referred to as wider bands. It permits only 10% variation between the currencies of any two countries. For example, a country can improve its balance of payments (BoP) deficit by depreciating it’s currency, which leads to increase in demand for domestic goods due to increase in purchasing power of other currencies. This further leads to the increase in exports, hence improving the BoP.

Crawling peg system allows continuous and regular adjustments in the exchange rate. Only 1% of variation is allowed at a time.

Managed floating is a scheme under which government can intervene to vary the exchange rate when the situation demands so. There is no specific limit of variation as in crawling peg and wider bands.

Solutions Chapter 5 – The Government: Budget and the Economy (Prev Lesson)
Back to ECONOMICS XII