Draw a rectangle of length 8 cm and width 6 cm. Divide it into three equal parts and complete the flag.

The top one – third of our flag is saffron (or orange). What is the colour of the middle one – third of the flag? Where will you draw the Ashoka chakra?

How much of the flag will you colour green? 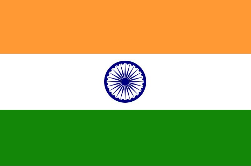 Total number of parts of the flag = 3 Now, we see that out of three equal parts, only one part of the flag is black. Thus,

We can also see that out of three parts of the flag, only one part is green. Thus, green part of the flag is

The red portion of the flag is less than

13of the flag, because a white emblem is also present in the red portion of the flag.

12? Is it more than three-fourths?

The blue colour is present in less than one-fourth of the flag.

I think, red colour is present in more than three-fourth of the flag.

Draw a circle of radius 3 cm and cut it out. Divide the circle into 8 equal parts. Now each part is

18of the circle. Colour

18yellow etc. as shown here. Push a matchstick through the centre of the circle. Your magic top is ready. Spin it fast! What do you see? Can you see all the colours? Write what you see in your notebook.

Disclaimer: Students are advised to prepare the answer on their own.

Chocolate bar • Manju had a chocolate. She gave one-fourth of it to Raji, one-third to Sugatha and one-sixth to Sheela. She ate the remaining part. How many pieces of chocolate did each get? • What part of the chocolate did Manju eat?

Total number of pieces in the chocolate bar = 12

Manju gives one-fourth of the chocolate to Raji. Number of pieces of chocolate given to Raji = 12 ÷ 4 = 3 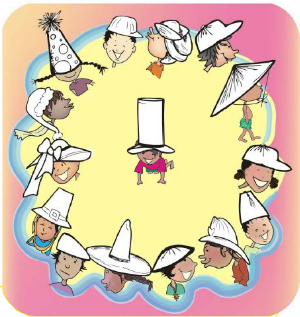 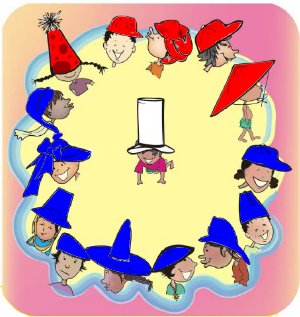 It is given that we have to colour

35of the total hats in blue.

Greedy Gatekeepers Remember Birbal, the clever minister of King Akbar? (Math-Magic Class IV. page 14) Do you know how he became a minister? Birbal was then a young boy living in a village. He was very clever and could write poetry. He thought he would try his luck in the King’s court. So he took some of his poems and set off for the city. When he reached the outer gate of the palace, he was stopped by the gatekeeper. “Hey! Stop there! Where are you going?”, shouted the gatekeeper. “I am a poet. I want to see King Akbar and show my poems to him”, replied the poet. “Oh, you are a poet! The king is kind, he will surely give you a prize. I will let you in if you give me

After listening to his poems, the king became happy. Then, Birbal requested the king to give him 100 slaps as a prize. 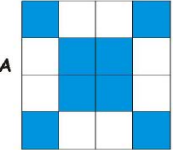 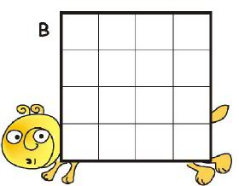 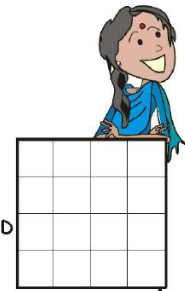 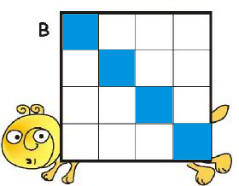 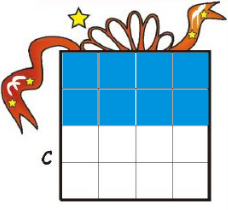 Look at grid A again. Is the grid coloured â€• (a)

Fraction of grid A that is blue-coloured   =

12Fraction of grid A that is white-coloured =

12of the grid A is blue and

Draw grids of 16 squares and make patterns with (a) 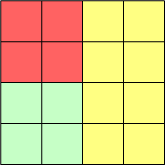 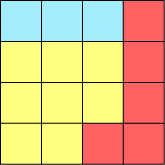 Ramu’s vegetable field has 9 equal parts. What vegetables does he grow? 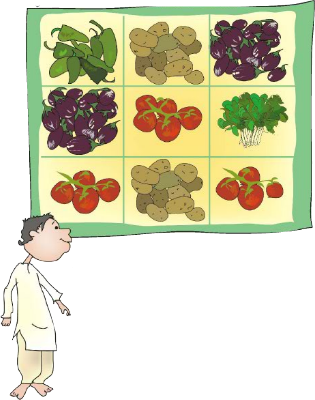 13    Ramu grows tomatoes in one-third of the field.

29    So, Ramu grows potatoes in two-ninth part of the field.

29   Thus, Ramu grows spinach and brinjals in one-ninth and two-ninth part of the field     respectively.

4) (1) Which vegetables are grown in the least part of the field? (2) What is the part of the field used to grow raddish and tomatoes together? Disclaimer: The answer to part (4) of the question may vary from student to student. It is highly recommended that the students prepare the answer on their own. The answer provided here is for reference only.

Ramu wanted to give below vegetables to his friends. He gave Aboobacker one-fifth of these tomatoes and

13of the potatoes. Srija got

25of the tomatoes and

36of the potatoes. Nancy got the rest of these vegetables. Circle Aboobacker’s share in blue. Circle Srija’s share in yellow. 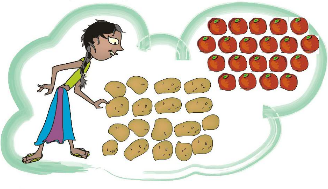 • How many potatoes and tomatoes did Nancy get?

Aboobacker got one-fifth of the tomatoes, and one-third of the potatoes. 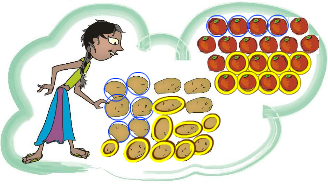 Thus, Nancy got 8 tomatoes and 3 potatoes. What part of each shape is coloured? First guess the answer, then check.

To cross-check our guess, we will divide each of the given shapes into equal parts of size of the coloured part as shown below :

On cross-checking, we now find that our guess is correct.

Look at the small triangle. What part of the square is it? How will you find this out?

We will divide the whole square into small triangles as shown in the adjoining figure.

We will get 16 such triangles.

116Thus, the coloured small triangle is one-sixteenth of the square.

This circle is divided into two equal parts. Out of _________ equal parts one part is coloured blue.

So, we can say that,

Ramesh bought a piece of halwa for his children Ammu and Anu. He divided it equally for them. • Each will get __________ part of halwa. “This piece is too big. We can’t eat it”, they said. So he divided the pieces into half again. Now how many pieces will Ammu get? ________ • What part of the halwa is it? _________ “Make it even smaller, Dad” they asked. So he again cut the halwa into smaller pieces. “Ok, thank you, Dad.” • Now how many pieces will each get? • What part of the halwa is each piece now? • If Ramesh had cut the halwa into 6 equal parts how many pieces would each have got? Look at your answers for questions 1 to 4 and write â€•

• When Ramesh divides the piece of halwa in two parts,then each child will get half part of halwa. Each will get

Thus, Ammu will get 2 pieces of halwa.

12Thus, Ammu will get half part of the halwa.

• As one whole piece of halwa is now divided into 8 equal halves, each piece is

18part of the whole piece.

• When Ramesh divides the halwa into 6 equal parts, then each of the 2 child gets 3 pieces of halwa.

Look at the picture. Write what part of the strip is each green piece. Write the part for a piece of each colour.

How many one-fourths will make a half? How many

12? Now ask your friends some questions on the same picture.

The green strip is divided into 4 equal parts. Thus, each part is

14of the whole green strip.

Two one-fourths will make a half. 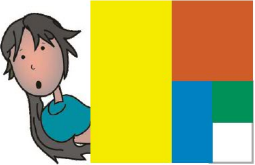 We will draw a grid to find the portion of each colour in the following square. 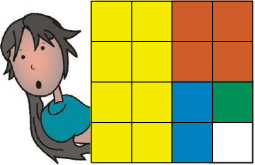 18Thus, one-eighth of the square is shaded blue.

116Thus, one-sixteenth of the square is shaded green.

Ammini says half of half and one-third of three-quarters are equal. Do you agree? How will you show this?

We can show the above with the help of figures.

15petals of a flower. Complete the flower by drawing the other petals.

The picture shows one-third of the blades of a fan. Complete the picture by drawing the other blades. 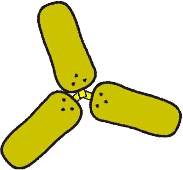 Half of the blades of another fan are shown here. Complete the picture by drawing the other half. How many blades have you drawn? We have drawn two more blades to complete the picture. 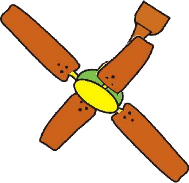 will make one rupee?

So, two 50 paise coin will make one rupee.

We know that, four 25 paise coins will make 1 rupee. So,25 paise is one-fourth part of one rupee.

There are five 20 paise coin in one rupee. So, 20 paise is one-fifth part of one rupee.

So 10 paise is one-tenth part of one rupee.

An Old Woman’s Will Once there lived an old woman. She lived with her three daughters. She was quite rich and had 19 camels. One day she fell ill. The daughters called the doctor. The doctor tried his best but could not save the woman. After her death, the daughters read what she had written in her will.

The daughters were really puzzled. “How can I get

12of the 19 camels?” asked the eldest daughter. “Half of 19 is nine and a half. But we can’t cut the camel!” The second daughter said. “That is right. But what will we do now?” asked the third daughter”. Just then they saw their aunt coming. The daughters told her their problem. “Show me the will. I have an idea. You take my camel. So you have 20 camels. Now can you divide them as your mother wanted?” the aunt said. “You want half of the camels, don’t you? Take 10 camels” she said to the eldest daughter. “Take your share”, the aunt told the second daughter. She took one-fourth of the camels and got _________ camels. “You can take one-fifth of the camels”, the aunt told the third daughter. She got ________ camels. The daughters were very happy and counted their camels 10+____+____=19. “The one remaining is mine”, said the aunt and took her camel away! 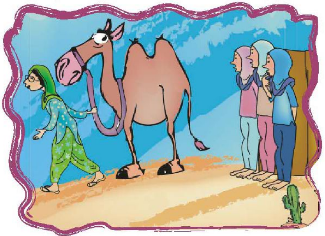 • How did this happen? Discuss.

10 + 5 + 4 = 19 When the daughters counted their camels, they found that there were in total 19 camels to be divided among them in total.

The division of 19 camels among 3 daughters in the given fractions was possible only when the aunt included her camel.

Sleeping: One third of a day Use different colours to show Playing: One eight of a day Studying:

14of a day How many hours does Arun take for

hours What part of the day does he use for other activities?

Thus, Arun sleeps for 8 hours in a day. Arun plays for one-eighth of a day. Number of hours Arun takes to play = 24

724Thus, Arun uses seven twenty-fourth of the day for other activities.

A school has decided to bring out a magazine every quarter of the year. How many magazines will they have in a year? If they want to print it at the end of each quarter of a year, which are the months for printing? Mark the number for those months.

A school brings 1 magazine every quarter of the year. Number of magazines brought by school in 1 year = 1 × 4 = 4

As the magazines are printed at the end of each quarter of the year, March, June, September and December will be the months for printing.

The given months are marked on the strip as :

Have you heard of Kumbhakarna, the brother of Ravana? He is famous for sleeping for half a year. Most people sleep about 8 hours a day. Then what part of a day is it? _________

The part of the year that people slept =

13So, people slept one-third of the year. (h) Make a bill of your own for vegetables you want to buy. Find the total money you will have to pay. Raheem’s journey Raheem has to travel

114km to reach school. What distance does he travel to go to school and come back home?

Distance travelled by Raheem to reach school from home =

Distance travelled by Raheem to return home from school =

What coins? Latha bought a pencil and a pen for seven and a half rupees. She gave Rs 10/−. The shopkeeper gave back the money in half and quarter rupees. What are the coins she got?

Cost of a pen and a pencil = Rs

Total money returned to Latha by the shopkeeper = Rs 10 − Rs

Now, the shopkeeper can return Rs

212in the following ways : a) 1 half rupee coin and 8 quarter rupee coins

At the railway station (a) What time is the train expected to come today? (b) Nazia gets off at a station after

212hours from this station. What time will she get off? (c) Shaji will take 5 hours to reach Ernakulam by this train. At what time will he reach there?

But, the train is late by half an hour.

So, expected time of the arrival of the train =

714    Thus, the expected time of the arrival of the train is quarter past 7.

b) Expected time of the arrival of the train =

Nazia gets off at a station after

212hrs of boarding the train.

Time at which Nazia will get off =

c) Shaji will reach Ernakulam by this train after 5 hours.

Expected time at which Shazi will reach Ernakulam =

1214Thus, Shazi will reach Ernakulam at quarter past 12.