It is an irreversible and permanent process, accomplished by an increase in the size of an organ or organ parts or even of an individual cell.

It is a process in which the cells derived from the apical meristem (root and shoot apex) and the cambium undergo structural changes in the cell wall and the protoplasm, becoming mature to perform specific functions.

It refers to the various changes occurring in an organism during its life cycle – from the germination of seeds to senescence.

It is the process in which permanent plant cells regain the power to divide under certain conditions.

It is the process in which de-differentiated cells become mature again and lose their capacity to divide.

It refers to limited growth. For example, animals and plant leaves stop growing after having reached maturity.

In plants, growth is restricted to specialised regions where active cell divisions take place. Such a region is called meristem. There are three types of meristems – apical meristem, lateral meristem, and intercalary meristem.

It can be defined as the increased growth in plants per unit time.

Why is not any one parameter good enough to demonstrate growth throughout the life of a flowering plant?

In arithmetic growth, one of the daughter cells continues to divide, while the other differentiates into maturity. The elongation of roots at a constant rate is an example of arithmetic growth.

Geometric growth is characterised by a slow growth in the initial stages and a rapid growth during the later stages. The daughter cells derived from mitosis retain the ability to divide, but slow down because of a limited nutrient supply.

The growth of living organisms in their natural environment is characterised by an S-shaped curve called sigmoid growth curve. This curve is divided into three phases – lag phase, log phase or exponential phase of rapid growth, and stationary phase. 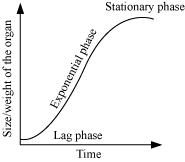 xponential growth can be expressed as:

e = Base of natural logarithms

Absolute growth rate refers to the measurement and comparison of total growth per unit time.

Relative growth rate refers to the growth of a particular system per unit time, expressed on a common basis.

List five main groups of natural plant growth regulators. Write a note on discovery, physiological functions and agricultural/horticultural applications of any one of them.

The first observations regarding the effects of auxins were made by Charles Darwin and Francis Darwin wherein they saw the coleoptiles of canary gross bending toward a unilateral source of light.

It was concluded after a series of experiments that some substance produced at the tip of coleoptiles was responsible for the bending. Finally, this substance was extracted as auxins from the tips of coleoptiles in oat seedlings.

2. They cause the phenomenon of apical dominance.

3. They control division in the vascular cambium and xylem differentiation.

4. They induce parthenocarpy and prevent abscission of leaves and fruits.

1. They are used as the rooting hormones in stem cuttings.

3. They induce parthenocarpy in tomatoes.

4. They promote flowering in pineapple and litchi.

Bakane or the “foolish rice seedling” disease was first observed by Japanese farmers. In this disease, rice seedlings appear to grow taller than natural plants, and become slender and pale green. Later, after several experiments, it was found that this condition was caused by the infection from a certain fungus Gibberella fujikuroi. The active substance was isolated and identified as gibberellic acid.

1. It causes elongation of internodes.

2. It promotes bolting in rosette plants.

3. It helps in inducing seed germination by breaking seed dormancy and initiating the synthesis of hydrolases enzymes for digesting reserve food.

2. It increases the length of grape stalks.

3. It improves the shape of apple.

5. It hastens maturity and induces seed-production in juvenile conifers.

Through their experimental observations, F. Skoog and his co-workers found that the tobacco callus differentiated when extracts of vascular tissues, yeast extract, coconut milk, or DNA were added to the culture medium. This led to the discovery of cytokinins.

1. They promote the growth of lateral branches by inhibiting apical dominance.

2. They help in the production of new leaves, chloroplasts, and adventitious shoots.

3. They help in delaying senescence by promoting nutrient mobilisation.

1. They are used for preventing apical dominance.

2. They are used for delaying senescence in leaves.

It was observed that unripe bananas ripened faster when stored with ripe bananas. Later, the substance promoting the ripening was found to be ethylene.

1. It helps in breaking seed and bud dormancy.

3. It promotes root-growth and formation of root hairs.

4. It promotes senescence and abscission of leaves and flowers.

5. It hastens the respiration rate in fruits and enhances fruit ripening.

1. It is used to initiate flowering and synchronising the fruit set in pineapples.

2. It induces flowering in mango.

3. Ethephon is used to ripen the fruits in tomatoes and apples, and accelerate the abscission of flowers and leaves in cotton, cherry, and walnut.

4. It promotes the number of female flowers in cucumbers.

During the mid 1960s, inhibitor-B, abscission II, and dormin were discovered by three independent researchers. These were later on found to be chemically similar and were thereafter called ABA (Abscisic acid).

1. It acts as an inhibitor to plant metabolism.

4. It induces abscission of leaves, fruits, and flowers.

What do you understand by photoperiodism and vernalisation? Describe their significance.

It is hypothesised that the hormonal substance responsible for flowering is formed in the leaves, subsequently migrating to the shoot apices and modifying them into flowering apices. Photoperiodism helps in studying the response of flowering in various crop plants with respect to the duration of exposure to light.

Vernalisation is the cold-induced flowering in plants. In some plants (such as the winter varieties of wheat and rye and biennials such as carrot and cabbage), exposure to low temperature is necessary for flowering to be induced. The winter varieties of rye and wheat are planted in autumn. They remain in the seedling stage during winters and flower during summers. However, when these varieties are sown in spring, they fail to flower. Similar response is seen in cabbage and radish.

Why is Abscisic acid also known as stress hormone?

Abscisic acid is called stress hormones as it induces various responses in plants against stress conditions.

It increases the tolerance of plants toward various stresses. It induces the closure of the stomata during water stress. It promotes seed dormancy and ensures seed germination during favourable conditions. It helps seeds withstand desiccation. It also helps in inducing dormancy in plants at the end of the growing season and promotes abscission of leaves, fruits, and flowers.

‘Both growth and differentiation in higher plants are open’. Comment.

Growth and development in higher plants is referred to as being open. This is because various meristems, having the capacity for continuously dividing and producing new cells, are present at different locations in these plant bodies.

‘Both a short day plant and a long day plant can flower simultaneously in a given place’. Explain.

Which one of the plant growth regulators would you use if you are asked to:

(a) Induce rooting in a twig

(b) Quickly ripen a fruit

(a) Induce rooting in a twig – Auxins

(b) Quickly ripen a fruit – Ethylene

Would a defoliated plant respond to photoperiodic cycle? Why?

A defoliated plant will not respond to the photoperiodic cycle.

It is hypothesised that the hormonal substance responsible for flowering is formed in the leaves, subsequently migrating to the shoot apices and modifying them into flowering apices. Therefore, in the absence of leaves, light perception would not occur, i.e., the plant would not respond to light.

What would be expected to happen if:

(a) GA3 is applied to rice seedlings

(c) A rotten fruit gets mixed with unripe fruits

(d) You forget to add cytokinin to the culture medium.

(b) If dividing cells stop differentiating, then the plant organs such as leaves and stem will not be formed. The mass of undifferentiated cell is called callus.

(d) If you forget to add cytokinin to the culture medium, then cell division, growth, and differentiation will not be observed.