The chart show the main methods of transportation for people travelling to one university for work or study in 2004 and 2009.

Summarise the information by selection and reporting the main features and make comparisons where relevant. 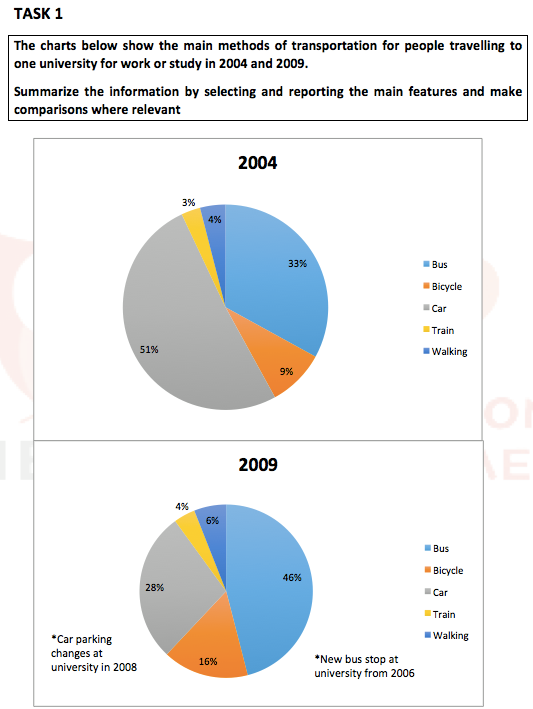 MODEL ANSWER
The two pie charts compare the percentages of travellers using five traffic methods to commute to one university for work and study in 2004 and 2009. In general, after ten years’ time, buses overtook cars to be commuters’ top preference for transport mediums. It is also obvious to see that while the proportion of people travelling by cars decreased significantly from 1994 to 2004, the popularity of other methods observed an upward trend.

In 1994, over a half of people (51%) travelling to the university used cars as their main method of transport, making automobiles the most preferred one, followed by bus with 33%. However, the figure for can users experienced a nearly twofold decrease to only 28% in 2004.  Witnessing a reverse trend, after a 10-year period, the percentage of bus-based travellers rose by 11%. The trend of preferring buses to cars could be attributed to the installation of a new bus stop in 2006 and alterations to the car park at the university in 2008.

An upward pattern was observed in the proportions of pedestrians, train passengers and bike riders. Marginally mare people chose to travel by train or walked to the university from 2004 to 2009, accounting for insignificant percentages of less than 6% between 1994 and 2004. These means are the least favored by travellers. However, a more substantial rise, from 9% to 16%, was seen in the bicycle share.

IELTS Cue Card Sample 103 – Topic: A special meal you have had (Prev Lesson)
(Next Lesson) Health, illness, and death
Back to IELTS